Welcome to Iced-Ink, the site with the coolest and weirdest word games to play when you’re bored with all the other word games.

By: Marc
With: 0 Comments 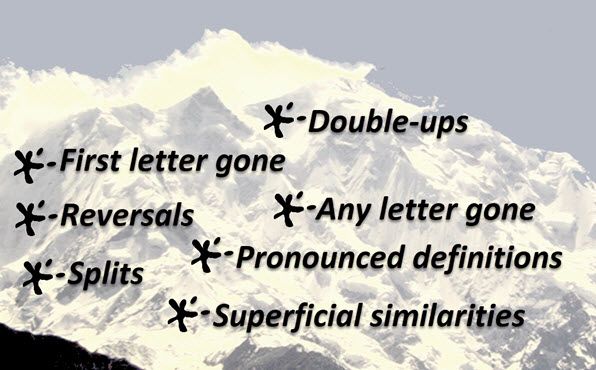 Iced-Ink is a website with word games. That’s it. There are no adverts or anything else that can distract you from the challenge of playing these games. Just choose the type of game that you want to play from the links below. New games will be added each week, so keep coming back for more if you like them.

Double-ups: Missing Middle. Read the clue and guess which word can go in the middle to form different phrases with the words on each side. Easy.

Double-ups: All missing. Read the clue and guess which words go in each place to form two different expressions. Fiendish.

Splits. The clues refer to two different expressions which are pronounced the same, but which have different meanings based on where you split the words.

First letter gone. The clues refer to two words, the second of which has lost the first letter of the first word.

Pronounced definitions. The first part of each clue refers to a word as it is, while the second part refers to an expression based on the pronunciation of the word.

Double-ups: Missing Sides. Read the clue and guess which words can go either side of the word in the middle to form two different phrases. Medium.

Double-ups: All for one. Read the clue and guess three words that go together to make a complete expression. Pure evil.

Reversals. The clues refer to two expressions which are formed from the same two words, but in reverse orders, producing two different meanings.

Any letter gone. The clues refer to two words, the second of which has lost one of the letters of the first word.

Superficial similarities. The clues refer to two words which have different meanings, but which are spelled and pronounced in exactly the same way.

© Marc Loewenthal, Iced-Ink 2020. No content may be used or reproduced in any form without express permission.